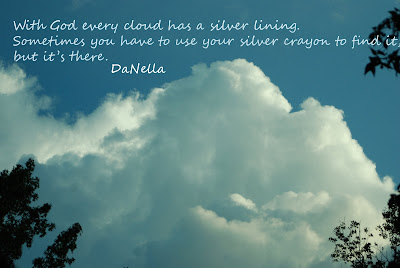 This one is for you Etta. I'm praying for you!

Submarines & Satan
Have you ever felt like you are in a situation where you had so much going on that if another thing happened you would simply explode? I remember such a time in my life. It seemed that all that could go wrong had:
o My father-in-law had to undergo some intensive cancer treatment, much of which took me and two young children an hour one way to Tampa at least once every two weeks.
o A teenager in our church was having problems with her parents, so we had just agreed to allow her to live with us on a trial basis.
o We had my husband and I, my father-in-law, a rebellious teen, a two year old, and a one year old under one roof. That mix alone was thick.
o My husband got sick with strep throat, and we had no insurance.
o The stress was causing me to skip my normal cycles and to be nauseous a lot of the time, causing me to think I might be pregnant, and giving me panic attacks.
o As if that weren’t enough, my two year old little boy jumped off some bleachers and broke his left femur. It is supposed to be the hardest bone to break. He had to be put into a full body cast.
I told you all of that just to say that seven years later I survived it all.
o Happily, Poppie survived and lived relatively healthily for five more years.
o God delivered me from panic attacks.
o The teen successfully reunited with her parents.
o Matt recovered fully, without even a limp.
o I survived!
The pressure around me was great, but the God within me was/is greater.
So, what does satan have in common with Submarines? They both use pressure. Satan tries to crush us, much as the ocean tries to crush the submarine. Check this out; it is the pressure inside the submarine that keeps it from crushing. If we have Jesus on the inside, He provides us with the pressure, or strength not to implode.

Email ThisBlogThis!Share to TwitterShare to FacebookShare to Pinterest
Labels: MICROBURSTS

DaNella, this is an awesome post! Thanks so much for sharing it and for linking it on my page. The photo too was great. You've given me some food for thought today.

Oh D -
You always know just what I need to hear and when. I so needed a word of hope just now. Thanks for letting God use you to help me face the pressure!
Ang