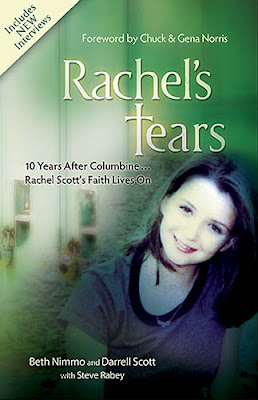 For this review, I read Rachel’s Tears, a book about Rachel Scott who was killed in the Columbine shootings. Where do I begin? I think I would like to rate it a two out of 5 swirls… (Swirls because this blog is Microbursts). I started out to read this review very excited, I was very interested to know more about Columbine. I was riveted, I devoured the beginning. By page 6 as they described how Rachel’s brother Craig had played dead lying in the blood of his friends. How awful. He was only 16.
I also found it very interesting that they included actual excerpts from Rachel’s diaries. I enjoyed getting to know more about her… That was about it. No not the end of the book, I was only on page24 out of 191.
I continued to read, but really lost my interest at about page 54 where Rachel’s parents started justifying being pastors with 5 kids, and getting a divorce. I am sorry, there is never a reason for two Christians to get a divorce, especially a pastor. Yes I hold a pastor to a higher standard, I am a pastor’s spouse, so I can. I only hold them to a standard as high as what I hold myself. Yes divorce happens. Yes it is needed in the case of abuse, especially physical. However, if they were both living for God as they should, problems come, but divorce is not an option. One of them stepped away from God, just admit it! Quit trying to justify it.
The final blow that killed the book for me was a section on page 90 entitled “Who said yes?” They made a big deal that it was never really confirmed that Cassie said yes (when asked if she believed in God before she was shot). They went on to say this guy said once that Rachel had been asked and said yes, but that the guy later recanted his story. However to them the second story of Rachel’s yes they claim is more valid than Cassie’s. They basically said Cassie’s wasn’t real, and that Rachel was the true hero. This is just sour grapes to me. Why try to trash Cassie? Just hold Rachel up with Cassie and say they both said yes.
Sorry, I wouldn’t waste my time reading it again.

Posted by DaNella Auten at 7:46 AM

Thx for the review! It shows a human side to the perfect story of a modern day martyrdom. I am somehow comforted by it. I guess I've been feeling less than perfect lately. I know I won't need to read it either.

Hope you are well today. My name is Dana Scott and Rachel Scott was my little sister. I happened upon your blog because of Google alerts that I receive. I hope you don't feel I'm intruding but normally I don't respond to blogs, but I felt like I was supposed to respond to this one.

I'm sorry that you were overall disappointed with the book. It was written both quickly and tearfully from my parents who were both still heavily grieving at the time. Your opionions are your own and I can respect that that's what the point of a blog is. But I had to tell you DaNella that I was also very disappointed to read what you wrote about my parents. Specifically these words, "One of them stepped away from God, just admit it! Quit trying to justify it."
Well, given the information you read in those few pages, it's easy to see how that conclusion could be drawn. I just wanted to share that it was both hurtful and felt unnecessarily judgemental to throw those stones out there like that. Like most situations in life, there is always more going on inside a person's heart than you can see from the outside. As someone in your position, it just seems that you would be a little more compassionate and or understanding. Thankfully the Lord has not judged us nearly as harshly and His forgiveness has healed wounds for many years now. I'm not writing this out of anger or defense, merely disappointment in your blog, as you expressed disappointment in our book. I wish you well and blessings for your life.

Dana, First of all let me say I am sorry for the loss of your sister. Thank you for responding to my post. I am sorry I upset you. However you are right, it is merely my opinion. I understand that we don't agree. However I was thrilled to get your feedback. I am praying for you and your family, grief can seam to never die sometimes.
Sincerely, DaNella