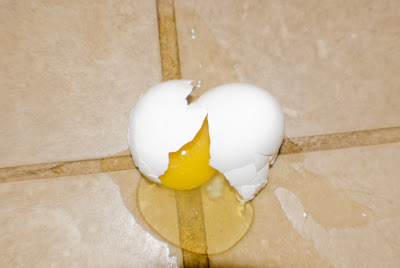 If you aren't careful it'll crack... Yeah well my day cracked early. If you regularly visit my other blog, don't bother... This is the picture you will see. I woke up at about 2 am, to a kid knocking on my door... When I opened it, there stood Juliannah. That in itself was no big deal, the pile of former stomach contents on the floor behind her... that was a big deal. Praise God several years ago, like 13 years ago, when we first had kids, Q and I established a pattern. I do eyes, and bottoms when needed (one of the kids had some suppositories once) and he cleans up puke. So I woke up Que to clean up the pile, and I proceeded to take care of the baby. We got her cleaned and settled. Tip here for moms, any pill can become a suppository once coated in Vaseline. When they are really sick to their stomach and can't hold down a pill, (Dramamine tastes sooooo awful anyway) I'll coat it in Vaseline, and gently push it just inside the rectum, (sorry a little graphic there, if I were a mom of a young child these are details I would want to know... ) and then don't allow them to poop for at least 10 minutes. So for distraction, as soon as we got the pill placed, I turned on Netflix. Oh how I love Netflix... They can be a blessing from heaven. She watched some movie about a dog that had cancer... Had Mr Jefferson on it from that old show... She didn't think again about having to poo. Until she woke up about 6:30 am and realized she had...
So after a bath, a cold bath because her big bro loves to take 30 min showers and use all the hot water, we got the older kids off to school, and she and I had to head over to Montevallo to let me take a test. She was so good she sat right outside the room on a couch where I could see her and was quiet the whole time. Then we came home and I made some pasta salad cause I was in the mood for it, and an awesome cake. It was in the midst of the cake making that I dropped an egg. So what did I do? It was cry or take a picture... so of course I took a picture. lolBecareful, don't drop your eggs. If you do it might be a sign you were trying to carry too many at once... I only had seven...

Editor's note added after initial publish. My mom an RN who initially told me about the pill thing added this to my information:
You want to correct your statement about giving things rectally.They should not give anything caustic such as aspirin or ibuprofen.Only those things that don't have to be taken on a full stomach are the things you can give rectally.

Oh by the way, my Niece Rebekah won the who am I, she was the first to guess chocolate pudding with whip creme mixed in... Gee got it right too. You go girls!
Posted by DaNella Auten at 11:49 AM

Email ThisBlogThis!Share to TwitterShare to FacebookShare to Pinterest
Labels: Bad day, here's what I am

Well I hope Juliannah is ok now. What a hectic day. I don't like it when they start out with something nasty then just get worse.

I did not know about the pill thing, thanks for the tip... I think ;-)

My mom is a RN, and she emailed me this today... "You may want to correct your statement about giving things rectally.
They should not give anything caustic such as aspirin or ibuprophen.
Only those things that don't have to be taken on afull stomach are the
things you can give rectally. Sorry about your day. Mom"