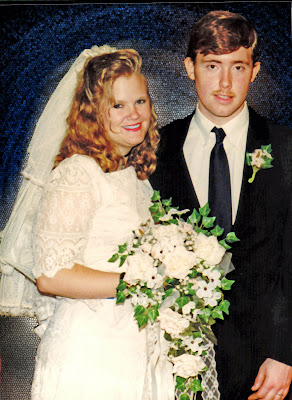 This is actually a little deceptive, this picture was taken on June 4th 1994, we actually got married May 20th.
We eloped... GASP! Yes I am serious. Back in 94 in Alabama you had to have a blood test to get a marriage licence. So we were looking for a place to get that done. It was gonna wind up costing like $50, not what we wanted... Who wants to pay people to stick you with needles??? That's a whole nother blog. So anyway, I called Mom, cause she is a nurse I thought she might know of a place we could get it done cheaper. She said she didn't. Right about that time Que pipped up and said, "We could drive to Florida and get married for that much money!"
What was my stolid sage mother's response? "Well if you aren't coming home tonight call me so I won't be worried."
To which I replied, well exclaimed is more accurate, "YOU DON'T THINK WE'LL DO IT!"
And she merely said "Call me so I don't worry."
So we called to Florida, and found out it only cost $80 to get married in the courthouse, and then we called the pastor and asked if he would mind renewing our vows in two weeks at our planned wedding, and then we called mom and said "I'm not coming home tonight, we are driving to Florida after work to get married."
She said "Ok, I love you, drive safe. Why don't you come by here and get the cooler and you can put some soft drinks in it."
lol
lol
Too fun. I love my mom.
So then we went to work and gave them 24 hr notice we would not be in the next night. They said why? and we said we are driving to FL to get married, and they said, "No you aren't" lol
So that night when we got off work at about 1am, we went to mom's house and got the cooler, and then drove to fl. We go to Pensacola at about 6:30-7am, and went to McDonalds for some breakfast since the courthouse didn't open until 8am. Then at about 8 we went in, filled out the paperwork, and had some lady marry us!!! What fun! Then we drove to the beach, but it was too cold really, and then went back to Q's house. I have been with him since.
I am so glad my mom let us, it is a great adventure we still talk about to day. This is true, all it, as Wendy Bagwell would say, "That's a fact with my hand up."

Posted by DaNella Auten at 8:30 AM

So all the years I've ya'll and I never knew that!!! What a great story you have. Happy Anniversary...hope you have a fantastic day together!

What a cute story. I love how your mom was all nonchalant about it.

That is a crazy story!! Congrats and Happy Anniversary!