So when Swine Flu attacks... 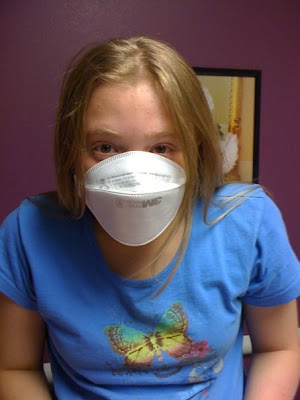 So Nana got the swine flu... And it spread... Latest victim... Q. He couldn't preach today last minute, so guess who preached? You got it, me. Here's my sermon tell me what you think...

What does a baby sin look like?
James 1:15 says, "Sin when it is full grown gives birth to death." So, if sin eventually becomes full grown, it had to start somewhere. Right? I figure if it grows, it had to begin. After all, a plant begins with a seed, a chicken begins with an egg, and a person begins as a baby. So, with that thought in mind, what does a baby sin look like? A thought. That is a baby sin. You think things before you say them; you think things before you do them. All of your actions begin with a thought. Now don’t get me wrong, it isn’t a sin to have the thought, it becomes a sin when you react wrongly to a thought, or allow yourself to believe a thought that is wrong.

So then I was talking to someone the other day, about something we both know that they are tempted to do, and ways to avoid it.
Did you know it isn’t a sin to be tempted? God, in the form of Jesus was tempted in the dessert.
If he was totally human, he was totally hungry.
Face it, exactly how long do you think you could go without food? I don’t look like I’ve missed any meals. Tymothie looks like he may have missed a few, but we do feed him I promise.
Ok so back to my convo with the tempted person. We discussed how they were gonna have to do something that could very well lead to a tempting situation. I pulled them aside and said,” look, this situation is coming up, and you know when this happens you are tempted to do “this”” they agreed, and I said, “so here’s how you handle it. You can’t always ‘flee’ temptation; sometimes you have to stare it down. So what you do, you realize now that it is coming, and you prepare your heart. You pray and ask God and he will help you. You decide now what you are gonna do and how you are gonna handle. You have to approach it like a battle sometimes. You have to be actively avoiding sin.”
Yesterday we had family Christmas pictures made, all 16 of us. I came up with the bright idea for each family group to wear a different color. So my natural choice is blue, but in the spirit of Christmas colors, I chose white shirts for my family. Have you ever tried to put 7 people in white shirts and blue jeans and keep them clean long enough to take a picture? It isn’t easy. I gave strict orders no one was to eat breakfast! (The pictures were early), no one was to touch the cat! (u know, the little scrawny thing we found here about a month ago… He is doing quiet well now. But I didn’t want grey cat hair all over white shirts for pictures) I wouldn’t let them fight, I pretty much told them all they were allowed to do is breathe.
We were actively avoiding dirt.
Sometimes we have to actively avoid temptation. We can’t be passive about it. If we know a certain place or thing tempts us we need to avoid it. However sometimes we can’t avoid it. Like for instance, if the people I work with like to gossip, I can’t just stop going to work, I have to still feed my kids. What I can do is refuse to participate. Sometimes when we’ve done all we can to stand we have to just stand, and stare it down. Similar to Ephesians where it says to put on the full armor of God…
Eph 6:10 Finally, receive your power from the Lord and from his mighty strength.
Eph 6:11 Put on all the armor that God supplies. In this way you can take a stand against the devil's strategies.
Eph 6:12 This is not a wrestling match against a human opponent. We are wrestling with rulers, authorities, the powers who govern this world of darkness, and spiritual forces that control evil in the heavenly world.
Eph 6:13 For this reason, take up all the armor that God supplies. Then you will be able to take a stand during these evil days. Once you have overcome all obstacles, you will be able to stand your ground.
Eph 6:14 So then, take your stand! Fasten truth around your waist like a belt. Put on God's approval as your breastplate.
Eph 6:15 Put on your shoes so that you are ready to spread the Good News that gives peace.
Eph 6:16 In addition to all these, take the Christian faith as your shield. With it you can put out all the flaming arrows of the evil one.
Eph 6:17 Also take salvation as your helmet and the word of God as the sword that the Spirit supplies.
Eph 6:18 Pray in the Spirit in every situation. Use every kind of prayer and request there is. For the same reason be alert. Use every kind of effort and make every kind of request for all of God's people.
So having said all that, I have to admit I’ve been tempted lately… I wrote this about two years ago.


Snake Eyes
The other day during praise and worship, Michael was talking about a story from when he was little. He said that there was this one G.I. Joe character that he just had to have. He was in love with it. Have you ever seen Snake Eyes? Take any G.I. Joe figure, paint it black with spray paint, and put some manly Barbie size sunglasses on it, and there u go, a Snake Eyes look alike. His dad pointed that out to him, but Michael was adamant, no, it had to be the REAL Snake Eyes. So they went to Wal-Mart, and got him one. He says he remembers, on the way home, he buckled it into the seat next to him in the middle seat of the van; made his little sister sit in the back seat, just so Snake Eyes could be next to him. He remembers how much he loved that thing. As he was remembering that, God spoke to him and said “That is how I feel about my children, I love them all. I created them.”
Now back to me…There is this one person in one of my classes that gets on my nerves. This person just annoys the snot out of me… Today I was driving, and as is my habit, I pulled out my digital recorder, to listen to the most recent lecture from my class. I try to refresh myself on it regularly. As I was listening to it, in the middle of the lecture, this person piped up again. I thought to myself Oh my goodness; he just can’t be quiet… It is like he tries to prove the professor wrong, and I feel like if the professor has a doctorate they probably know what they are talking about…. (Sarcasm intended) So anyway, I was in the middle of myself righteous tirade, and God quietly said “Remember Snake Eyes. He is just like Snake Eyes. I love him too.”
Thanks Michael… (Sarcasm here) now you got me in trouble with God.
No, I got me in trouble with God, by not realizing that God loves this person, as much as he loves me.


Christ has given us this commandment: The person who loves God must also love other believers.
I John 4:21


Guess who is in my class that just started? You guessed it… Snake Eyes.
I have to learn to love them like God!

Posted by DaNella Auten at 4:07 PM