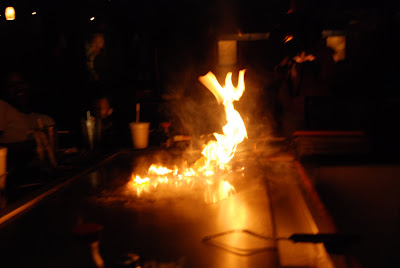 (fire from a meal at Mizu, I just liked the fire pic, looks like a phoenix...)
This is an "Assemblies of God special announcement."
"Assemblies of God denounces burning of Qur'an In what has become a national furor, a small non-denominational church, Dove World Outreach Center, in Gainesville, Florida, has announced plans to burn copies of the Qur'an on Saturday, September 11 — the anniversary of the 9/11 terror attacks. As the church has reportedly made claims of Pentecostalism, the Assemblies of God — the overall ninth largest denomination in the United States and one of the largest Pentecostal denominations in the United States — has made it clear it has no ties with the church and has publicly objected to the burning. "I don't believe that [burning the Qur'an] is respectful toward the very people we want to love into the Kingdom," states AG General Superintendent George O. Wood. "It only drives Muslims farther away from the Lord Jesus and reinforces the false notion that followers of Jesus are crusaders from the Middle Ages." General David Patraeus, the American commander in Afghanistan, and President Barack Obama have both voiced their strong objections to the planned burning — saying that it will put the lives of American soldiers at risk and be used as a recruitment tool for Al Qaeda. Numerous church and religious leaders have also condemned the burning. However, Terry Jones, the pastor and founder of Dove World Outreach Center, has indicated the burning will still take place. "Such actions as these only make it more difficult to effectively witness to Muslims," Wood says. "Our focus should be on sharing the amazing love of God that brought Jesus into this world to die for our sins — not engaging in activities that only drive people farther away from Christ." --AG News"
Having said all of that, how do you feel?
Do you think it is wrong?
What about people burning bibles?
Should we just 'turn the other cheek?'

Posted by DaNella Auten at 4:31 PM

Email ThisBlogThis!Share to TwitterShare to FacebookShare to Pinterest
Labels: buring the quran