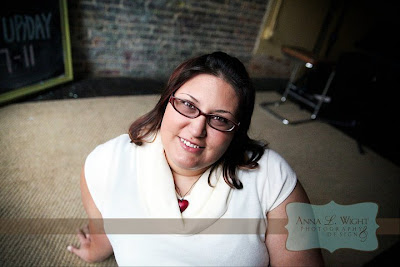 This is my friend Stacey, she is a youth sponcer with us at Christian Life Fellowship, where Que and I are the Youth Pastors. Last night we opened a "Can of Worms" in youth. This was one result.
(Thanks to Anna L. Wight Photography for the picture.)

The youth group tonight started a discussion (that I came in on rather late, as I was helping out with kids & couldn't get there quicker, sorry guys, for the interruption!) about something that I feel pretty strongly about... suicide. First, I think you may want to know why I feel this way.

As someone who (long story short) has struggled with self-worth issues & depression most of her life, I was pretty quick to jump on the bandwagon when I came across ideas that made me feel important. I had an eating disorder in junior high, became a practicing Wiccan, went goth in high school, skipped school, wrote obscure poetry & song lyrics about death & loneliness... you get the picture. I was one of those. So when I had a particularly bad breakup (that followed a terrible, co-dependent relationship), I felt I needed to end it all. I felt that THEN someone would listen, THEN someone (ANYONE) would pay attention. So, I took a whole box of medicine, hoping I would just fall asleep & never wake up. I woke up the next morning, upset that I hadn't just ended things, but didn't know that I was pregnant. I attribute that second heartbeat with saving my life, tell me I'm wrong. I dare you. So, I had thought that I needed to end things to never, ever, be lonely again - that people would be SO sorry they had ever ignored me, or rejected me, or just plain not giving me their love.

I was lied to, everything in my life told me I needed to hate myself, that the only way I would ever be worth anything was if I was a part of someone else, that I could somehow glom onto their worth, and it could be my own. That I could "bewitch" someone or seduce someone into something, if I only concentrated hard enough. And that set me up for a whole mess of failures, the sting of every one feeling like an earthquake in my soul. See, I know what it feels like to be that person... and God set me FREE from that. Since the day that happened, I have never ever felt like a worthless, hopeless, or helpless person. I know my worth isn't because of anything I have done, but what He has done for me, and what He can do through me, if I only allow Him to. He has shown me that I am His child, always have been, and that He LOVES me, enough to send His son to be humiliated, betrayed, wronged, beaten, broken, and after all of that, to take on everyone's sin - and He never did a single thing wrong! He was allowed to experience every single human emotion, without ever succumbing to sin, and He died - for me, for you, for the very people who spit in his face, for the ones who don't believe, for the ones that are cutting themselves to temporarily stop thinking about their pain, for those who are drinking their worries away, for those who are abandoning their children, for the ones who habitually lie, for those who hurt other people for no other reason than they want the high of control, for every single person who has ever & will ever walk this earth.

My heart hurts for you if you think you are worthless, that you have nothing... you have everything. He has done everything for you - accept it!! Healing, acceptance, justice, peace, companionship.... whatever you need (more than you need!!)- just accept it - it's a free gift for all of His kids! You, right now, are a prince, are a princess, and YOU ARE WORTH IT ALL.

Ps, I have a website for you. It's www.twloha.org, thanks to a friend who went to school in Florida, I found out about them years ago, for those who don't know what they're all about, here's their mission statement, copied directly from their site:

"To Write Love on Her Arms is a non-profit movement dedicated to presenting hope and finding help for people struggling with depression, addiction, self-injury and suicide. TWLOHA exists to encourage, inform, inspire and also to invest directly into treatment and recovery." People know what you're going through - do NOT hesitate to ask for help. You ARE worth it.

We love you too Stacey! Thanks for sharing.

Posted by DaNella Auten at 1:44 PM