I really love it when God shows me things, about myself or others. One of the things he showed me tonight was that "I love you" had become a trap to my husband. How? How could a simple phrase, words of affirmation, become a trap? Because early on when we first got married, 22 years ago, I trained him. I used to say I love you at night before we would go to sleep, and he had to say it back.
No, you don't understand. He had to say it back. I was Monkish (as in the tv show, as in obsessive compulsive, you HAVE to say it, or I won't let you go to sleep, because I won't be able to go to sleep, and we ALL know it is ALL about ME>>>) in my pursuit of his saying it back. To the point where it got to where he trained himself to be asleep and mumble it because I had to hear it. It was part of me being needy I had to have that security. It was a romantic notion, I wanted "I love you" to be the last thing each of us heard before we went to sleep. You know, incase something happened to one of us in the night... Ok, ok it was actually just selfish insecurity. I admitted it, are you happy now???
The problem is I OBSESSED over it. We would lay there and talk at night, and then I would hear him start to snore, so I thought to myself "I'll be nice and let him go to sleep..."
(out loud) "I love you..."
(patiently waiting for a response) "I LOVE you.."
(not so patient elbow jab) "I LOVE YOU>>>"
and he would mumble Ilu utoo"
Looking back I see how it became a trap.

However, I robbed myself of being able to give him the gift of saying I love you, without expecting him to say do or give me anything in return. I was young and foolish and didn't understand what unconditional love was. First Corinthians 13 love.
I Corinthians 13:4-8a 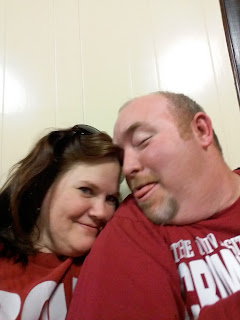 Posted by DaNella Auten at 8:42 AM